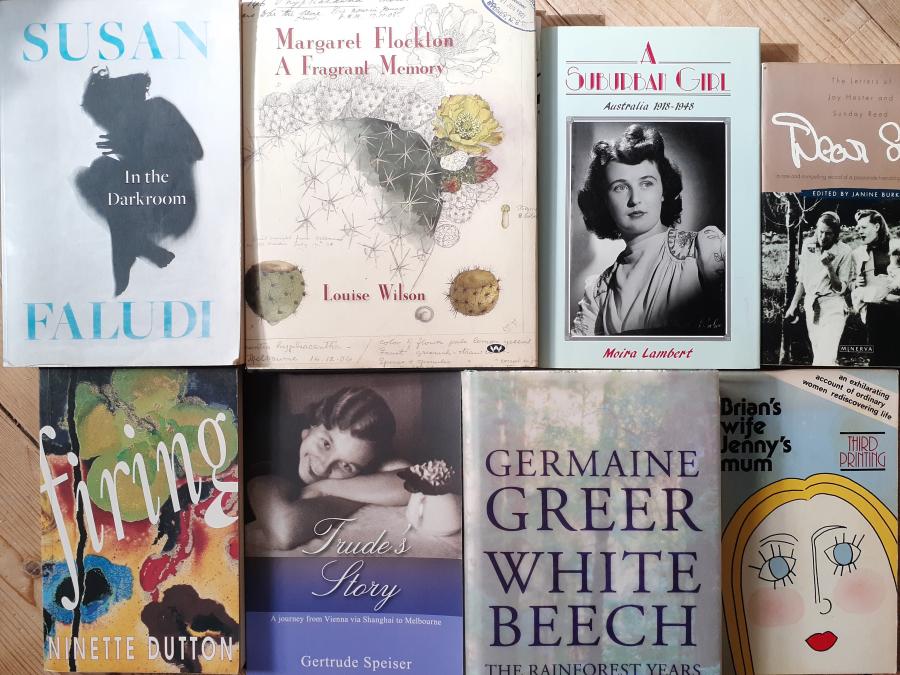 Last month, for the GSV Writers discussion on 'Telling Women's Stories', some members provided lists of thought-provoking references that delve into the complexities of women’s histories in Australia. Following Women’s History Monthand to encourage wider thinking about women's storieswe thought we would share these lists with you, with thanks to the GSV Writers Discussion Circle.

Dr Kristy Love*who has recently joined the GSV Volunteers' Team, edited and added to the lists and contributes this overview.

In offering this list of references, we acknowledge that it is by no means a comprehensive source of writing about and of women’s histories, but we hope it gives sufficient breadth to encompass a range of experiences.

History books tend to focus on, royalty, the military, enterprise, exploration, and discovery, primarily by men and about men, often to the omission of in-depth portrayals of the lives of women. We hope this list goes some way to covering those gaps.

The list includes several classics of feminist literature and women’s rights - a must for understanding the changing political and social forces at play in women’s lives. It also encompasses texts on intersectional feminismthe waythat overlapping identity categories, such as race, religion, ability, sexuality, class, and culture affect people’s opportunities and status in the world. These books are important as they can help us think critically about women’s histories have been told, about the authors of those stories and about what they have chosen to include and omit in histories of women. These references can also help us become more aware of our blindspotsso that we can write more nuanced histories that encompass the complexities of women’s lives.

The list includes books that provoke thinking about the Indigenous Australian women whose families were decimated by colonisation and whose children were forcibly removed under racist acts of Parliament. It includes references about sexual and reproductive rights. About the difficult paths faced by single or unmarried mothers, many of whom also gave up their children under duress.About the lives of women who faced perilous journeys as they immigrated here or fled dire circumstances in their countries of origin. About the pioneering women, both free settlers and convicts, many of whom had to endure multiple births from a young age. Many women suffered harsh conditions living on the goldfields and on isolated back-country farms and stations.

It includes books about those women who lived lives outside of the norms of the time, such as those criminalised by poverty, or those demonised by differing historical ideas about mental health and institutionalisation.

The list also provides references about the organisations set up by women to support other women, about the collectives of women who fought for equality and changes in legal status - the right to vote, to own property, to work, to education, and for reproductive rights. Otherare about individuals, of women’s personal stories of war, as pioneers in their professions, as scholars, as mothers.

We encourage you to explore the list and welcome suggestions for additions.

You can add your suggestions as a comment to this post on the blog or on our Facebook site. There is plenty of interesting reading for autumn to fuel your current research and writing.

Dr Kristy Love (formerly Davidson) is a with a family histry writing. She recently joined the GSV Volunteers Team and assistwith our GSV Blog Family History Matters. Kristy has a PhD in Creative Writingand worked for

In the Darkroom by Susan Faludi (Willam Collins, 2016) - her investigation of her violent father and his new identity as a 'complete woman'.

Firing by Ninette Dutton (Editions Tom Thompson, 2011) - an autobiography 'for her granddaughter...who is part of the story'.

Trude's Story: A journey from Vienna via Shanghai to Melbourne, by Gertude Speiser (Makor Jewish Community Library, 2008) - memoir of escape from Nazi Austria and emigration to start a new life.

White Beech: The Rainforest Years by Germaine Greer (Bloomsbury, 2014) - memoir of 'an old dog, who succeeded in learning a load of new tricks' restoring sixty hectares of Qld rainforest.