Huge new workhouses were built across England and Wales after 1834 to accommodate and control the poor in accordance with the Government's new poor law regime.  The regime was introduced in Ireland, and on a modified basis in Scotland, from the 1840s.  The workhouses and laws were deliberately harsh - and the impressions left by Charles Dickens and others attest to the living and working conditions of our ancestors who were inmates, workers or officers.

A talk at GSV this coming Thursday 31 January - 12 - 1 PM  - will introduce you to the New Poor Laws and the workhouses. See all details on our website NEW POOR LAW TALK.

Stephen Hawke will describe the harsh laws, rules and living conditions that broke up families and institutionalised children; the scandals and lax government response; and what it was like to live, work and die in a workhouse. Find out how to use the records and resources at the GSV to discover if your ancestors were involved. 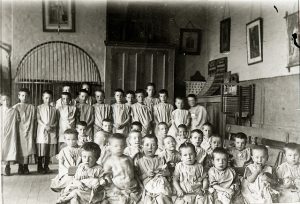 The Book of the Bastiles (G Baxter, 1841) provides first hand testimony from inmates and others and records that families suffer the greatest destitution rather than submit to go into the workhouse. Tens of thousands were admitted each year. The Governor of Bath gaol reflected that former workhouse inmates far preferred prison residence, discipline and food to that in the workhouse.  In too many workhouses the gross overcrowding, maltreatment, starvation diets and corrupt practices by some workhouse managers compounded the misery for inmates.  In the 1840s a series of appalling workhouse scandals and deaths in Hampshire, Surrey and Yorkshire embedded a fear of the workhouses which prevailed until they were closed in the 20th century.

The New Poor Laws are important social history and for many of our ancestors the workhouses were a major factor in their departure for the Australian colonies.