Scotland during the Enlightenment - Seminar 13 July 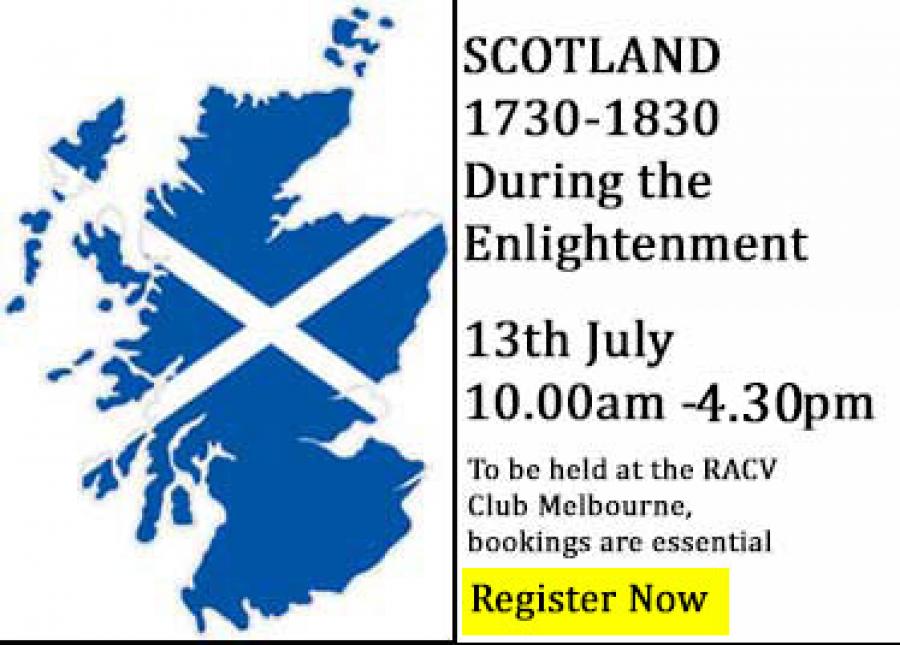 If you have Scottish ancestors (I have a Campbell) - and even if you haven't - you may have been watching The Rise of the Clans on SBS presented by that long-haired archaeologist and history-warrior, Neil Oliver, who is often seen from a helicopter standing on the edge of a cliff.

On 13 July the GSV gives you a wonderful opportunity to catch up with what the Scots were doing a few hundred years later. This day-seminar will explore an exciting period of intellectual and scientific accomplishments in Scotland from the mid-18th to mid-19th centuries.

of The Genealogical Society of Victoria, Inc.

The Highlands during the Enlightenment

Scotland, the Enlightenment, and Australia: Legacies from Macquarie to Menzies

You will hear from great speakers.

Alex Tyrrell was born in Scotland, educated at Edinburgh and McMasters Universities. Prior to retirement he was an Associate Professor of History at Latrobe University. His research interests include aspects of national identity in Victorian Scotland.

Bruce McLennan is the coordinator of the Clan MacLennan worldwide project, focussing on Scottish records as well as New Zealand, Canada, Australia and the USA. He is an author and presenter at international events.

Malcolm Horsburgh has been researching his family history and genealogy for 35 years in both Edinburgh and Australia. He is a long-term member of the Scottish Ancestry Group and a current member of the committee.

Ben Wilkie has an honours degree and PhD from Monash University on the history of Scots in Australia. His interests include stories of the Scottish diaspora. He is an author and past lecturer at Deakin University.

Be quick to book your place.

Cost: $60 GSV members, $90 all other non-members. Scottish Ancestry Group subscribers who are not members of the GSV should apply to the GSV for a reduction to $60.