Your own coat of arms 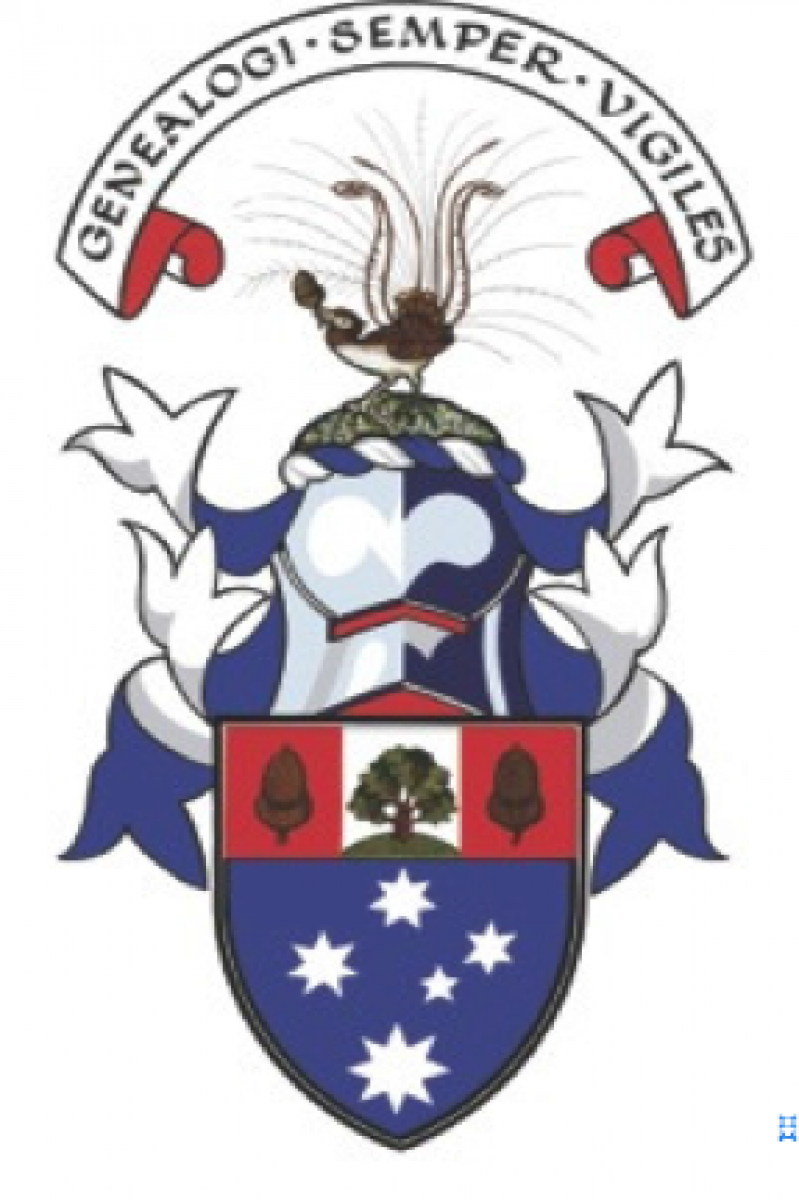 My teenage grandson recently quipped that: 'The Barlows have a coat of arms, you know'. He had found it on the net. It reminded me that in my early family-history research days I recorded the 'Barlow' arms in my notebook and, having a healthy cynicism I have not paid it any more attention. But, with the great interest today amongst youngsters (and the not so young) in 'things mediaeval', encouraged by 'Game of Thrones' and so on, perhaps 'coats of arms' may be a good way to excite an interest in genealogy and in history generally. And that is always a good thing! As long as it doesn't lead to tribalising and marching under banners.

I can't see our Genealogical Society of Victoria marching anywhere bearing arms - but we have them! In 1941 a logo with a tree trunk emblazoned on a quaint tilted shield was adopted. In the early 1960s the GSV endorsed four special interest groups, one of which was the Heraldry Group. Then in 1986 the GSV acquired its current coat of arms through official British channels. That there was some tension between budding republicans and monachists had been shown when, at the GSV's Colonial Dinner in 1985, the National Anthem tape was sabotaged by someone reinstating 'God Save the Queen' for the newly adopted 'Advance Australia Fair'.

Coat of Arms of the GSV

The GSV's coat of arms, or Ensigns Armorial, was designed and granted to The Genealogical Society of Victoria by the Court of the Lord Lyon of Scotland, King of Arms on 1 March 1986. It is described as:

Azure, five mullets [stars], one of eight, two of seven, one of six and one of five points Argent (representing the constellation of the Southern Cross), on a chief Gules, a pale of the Second charged of an oak tree Proper issuing from a mount Vert, and fructed Or, between two acorns slipped of the Last. Above the Shield is placed an Helm, suitable to an incorporation (videlice: a sallet [helmet] Proper lined Gules), with a Mantling Azure doubled Argent, and on a wreath of the Liveries, is set for Crest on a mound of pink heather a male lyre bird close and in display Proper holding in its beak an acorn slipped Or, and in an Escrol over the same this Motto: "GENEALOGI SEMPER VIGILES".

Public Register of all Arms and Bearings in Scotland, 69th volume, page 20.

The Shield was based on the arms of the State of Victoria with an oak tree added to represent genealogy. The oak tree is a long-lived tree and its fruit, the acorns, represents the seed origin of the tree from which continuing generations of oak trees and acorn seed will spring. The Crest comprises two parts, the Device, which shows the lyrebird, native of Victoria with an acorn in its beak, and the Mount which incorporates the Pink Heath, the floral emblem of Victoria.

The Motto, Genealogi Semper Vigiles, translates from Latin to 'genealogists always watchful'and is a play on the initials of the Society.

Apparently if you fancy having a coat of arms you can just design your own - whilst being careful not to infringe trade marks.

The Australian Heraldry Society website has an interesting discussion about the authority of granting arms. The Australian PM issued advice in 2018 that: 'There is nothing preventing any person or organisation from commissioning a local artist, graphics studio or heraldry specialist to design and produce a coat of arms or identifying symbol. Those arms would have the same standing and authority in Australia as arms prepared by the College of Arms in England.'

However like an 'Engrish' T-shirt, or when co-opting any language, it will help if you know what various symbols you use could be taken to mean. The Australian Heraldry Society could help (https://www.heraldryaustralia.org/your-arms).

When you design your avatar take careful note of the powers and attributes you assign. But your game-playing kids will know all about that.

Amateurs and Experts: a history of The Genealogical Society of Victoria 1941–2001,by Elizabeth Ellen Marks, Penfolk Publishing, Blackburn, 2001.