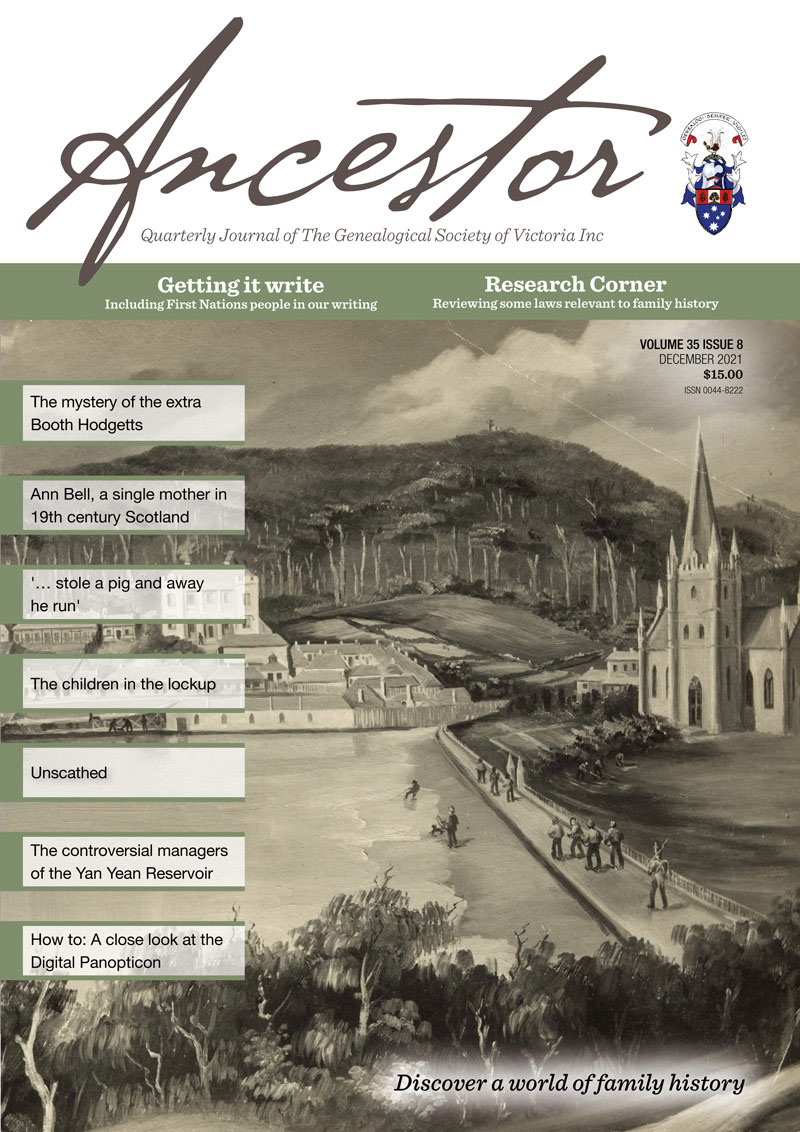 What's in the current issue of Ancestor

December 2021 ( GSV Members can access this journal when they login as a member. Then click on the "Members Area" link)

As we are unable to hold our usual end of year volunteers morning tea, the GSV is saying ‘Thank you’ in the form of a double page list of volunteers in Ancestor. Without their input the Society would not be able to offer the range of activities and assistance that it does.

The editorial team would particularly like to thank those writers who make regular contributions to Ancestor. Our outgoing President, Jenny Redman, has written informative newsletters during her term of office, in what has surely been one of the most difficult periods for the GSV. Meg Bate and Linley Hooper, our hard-working library staff, always provide us with interesting snippets through Jottings and Blogging as well as sharing responsibility for Research Corner. Tara Oldfield keeps us up to date on developments at PROV while Cheryl Griffin introduces us to the treasures of the RHSV.

As usual in December, we feature the winning article from the GSV Writing Prize, which is ‘The mystery of the extra Booth Hodgetts’ by Susan Wight. Read more about Susan’s story and the runner-up on the inside cover of the magazine. Teresa Collis has written an account of her ancestor’s service as a medical orderly in the 3rd Light Horse Field Ambulance in the First World War and his life in later years. Moreen Dainty was curious about the life of an unmarried mother in 19th Century Scotland, and set out to uncover her story. Paul Magill tells the intriguing story of two men, John Lanktree and Matthew Jackson, who migrated to Australia and were appointed to senior positions to oversee the building of the Yan Yean Reservoir. John Fitzpatrick writes about his convict ancestor Michael Cusack who was transported for stealing a pig and went on to become a prominent citizen of Wangaratta. In May 2021 the Moonambel Arts and History Group launched ‘The children in the lockup’ sculpture, commemorating an event from 1896. Jennifer MacKay relates the story behind the sculpture and how, with the help of the GSV, she was able to trace a descendant of one of the children. Kristy Love’s ‘How to’ article guides us through the Digital Panopticon, a centralised online repository for records for convicts from London in Britain and Australia.